We got lost. We got towed. But in the end, we had a damn great time at Dancing Gnome Beer in Pittsburgh. I know you’ll love this episode because it was so much fun to make! You can watch it on our Youtube Channel or on our Facebook page. Honestly, you should probably be a fan of both. Cheers! 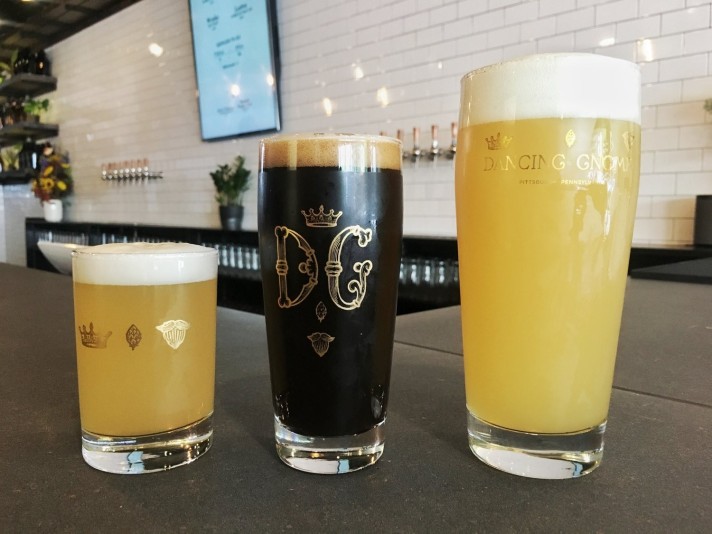 It’s no secret that Pittsburgh is a city that prides itself on hard work, ingenuity and quality. So it should come as no surprise that Dancing Gnome Beer showcases all of these attributes and more the moment you walk in the door.

Dancing Gnome sits in the neighborhood of Sharpsburg, which is about 5 miles northeast of Downtown Pittsburgh. This community has an historic architectual feel and is bustling with youth and energy. Accompanied by absolutely gorgeous weather, we arrived for our shoot midday, eager to check out what Dancing Gnome had to offer. I will say that I was extra in need of a beer because Sheila (my gps), decided to take us on an adventurous hour long detour that included parts of Pennsylvania no one ever needs to see. Sheila is a sweet woman but she can be stubborn and has a mind of her own.

Walking in, it’s easy to see why Dancing Gnome fits in this neighborhood. It’s a small and intimate taproom that was filled with people of all ages (over 21 of course). Behind the bar, was the owner and head brewer, Andrew. It’s easy to see that Andrew takes pride in his beer as he was enthusiastically talking to a group of locals about what they were trying. While he is young and laid back, simply put, Andrew knows his stuff. Our tour included explanations of Dancing Gnome’s origin story, inspiration for beer names, keeping things fresh and creative and putting his stamp on the Pittsburgh beer scene. They are unapologetic in their brew style and for good reason. Everything we tried seemed meticulously detailed and complex. My personal favorites were the O.B.B Special Pale Ale and the Spy Dolphin Double I.P.A. The Spy Dolphin was light, refreshing and had that wonderful finish that you ask for in a double ipa. Also, the Lustra American Pale is one of the more unique beers that I’ve ever tried. You get the citrusy notes of orange peel and grapefruit and this thing is packed with flavor for being a pale ale. It’s impressive.

As for our comedy show, it was a major major success! About 70 people filled the small space to come and check out their Pittsburgh comedy scene and drink some delicious beer. I personally believe that comedy can be the most fun in these intimate DIY settings and the show at Dancing Gnome certainly helps that case. Also, it doesn’t hurt when the comics are supremely talented and funny. Special thanks to Peter Heinz, Amanda Averell, Derek Minto, Gregory Joseph & Gab Bonesso. Because of you, the audience had no reprieve from being taken to crush city.

All of our fun interviews with Andrew, staff, comics and locals will be included in our Dancing Gnome episode, April 10th.

Be sure to subscribe to our YouTube Channel! Our next episode, “Against The Grain” in Louisville comes out on March 13th!

In the meantime, CHEERS!

Hey gang! We had a blast shooting at Black Acre in Irvington. This episode is the bees knees and we know you’ll love it! Check it out here:

What seemed like a pipe dream 9 months ago, is slowly becoming a reality. On Monday, Feb. 13th, BrewTube Comedy will release it’s first episode, filmed at Black Acre Brewing in Indianapolis.

At first, when I had the idea to do a web series that combined craft beer with stand-up comedy, I just wanted to do something cool, unique and fun. “Easy as pie!”, I thought to myself (My sub-conscious speaks to me in early 1900 idioms apparently). Little did I know the undertaking of putting together a project such as this would be. I’m just a stand-up comic and avid craft beer after all. I’d need to find a videographer, talk to brewers, book the shows, get out press releases, make sure the shows were well attended not to mention finance the whole thing. Sheesh!

But they say if you’re passionate about something, you’ll never work a day in your life. And listen gang. I’m passionate about good beer and good comedy. My little idea to combine the two has now blossomed into a full time passion. I’ve learned by talking to brewers and brew professionals over the last few months that this is a natural progression. Something starts small and then transforms into something big. Maybe an obsession for brewing leads to a full time brewing position. Maybe that off the wall recipe is really well received and gets national attention in a beer competition. That’s what breweries and comics have in common. Small world. Big ideas.

So now, we’ve filmed at Black Acre in Indianapolis and Against The Grain in Louisville. Our next show will be at Dancing Gnome in Pittsburgh on Saturday, Feb 18th and we are in talks to add several other breweries to the 2017 calendar year.

One of the goals of the show still remains to be something that is unique, fun to watch and informational. My hope is that you’ll watch and find a new comedian that you like and a new beer you want to try. BrewTube just aims to be a big ol’ fun and lighthearted party. Join us!